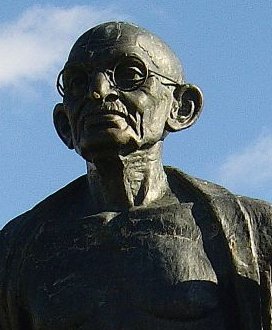 In my History today, I learned about Mohandas Ghandi. Ghandi had a good idea and was a great leader.


India wasn't happy with British rule and the Indians wanted to rule themselves. Ghandi was an Indian leader who worked for freedom but he did not believe in fighting. He and his followers refused to do what the British said and he and some of his people went to jail for that.

His resistance paid off in 1947, India became a free country and part of the commonwealth of Nations.

Other Facts About Ghandi

Mohandas Ghandi was born in Porbander in Gujarat India on October 2 1869. He was educated in law at University College, in London.He was raised in a very conservative family that had affiliations with the ruling family of Kathiawad.

Do you think Ghandi did what was right? I do!

Also, for my website, I am making a dragon story section where kids can join in on making the story.


An eye for eye only ends up making the whole world blind.
Mohandas Gandhi